How have things changed for logistics businesses

Here at Cat® Lift Trucks, the run up to Christmas and the festive season always make us feel nostalgic for traditions and old times. It’s made us think about our materials handling industry and just how much has altered over the years.
So how have things changed for materials handling, the logistics businesses and workers between the 1920s and the upcoming 2020s? In 1920, everyone was struggling to recover from the ‘Great War’. Sadly, it would not be the last. In contrast, today in Europe at least, we enjoy peace and co-operation between countries. Politicians settle issues through discussion – usually polite! – rather than fighting.

Goods distributed in the 1920s tended to be life’s essentials. Now we have millions of products to choose from – many of which are luxuries. Thanks to modern materials handling machinery, automation and digitalisation, manufacturing productivity is comparatively huge. Lorries were relatively uncommon back then, with most goods being loaded first onto horse-drawn transport. For longer distances there were steam trains, while overseas trading depended on ships. Air freight was a very rare option. Cranes could be used for items much too heavy for people to lift, but most loading and unloading involved hard manual labour with none of the comfort and ease that the modern forklift trucks offer. A few businesses, however, had lifting and handling vehicles which can be considered as the forerunners of machines like Cat® forklift trucks, which now make the whole materials handling work so much easier.

Those labourers endured very poor wages and conditions compared to today’s employees. Health, safety and welfare were much lower priorities to employers and legislators in the earlier decades than they are now. The average life expectancy in Europe was about 57 years (today it’s 81 years). For the poor workers and their families, with little access to medical care, it was lower still. Additionally, at home, they lacked the conveniences we take for granted today – like indoor toilets. Luxuries such as refrigerators, telephones and cars were beyond their reach. And both rich and poor had to survive without television, as it hadn’t been invented yet!

The Second World War brought with it the need for better and faster logistics as well as improved storage and movement of goods such as war materials, from one place to another. It vastly influenced the increase in forklift development and production in the materials handling industry and since then the use and development of forklift trucks has greatly expanded worldwide. Now more sophisticated than ever, forklifts have become an indispensable piece of equipment in manufacturing and warehousing, greatly helping to improve the efficiency, comfort and safety of the work involved.

People often talk about ‘the good old days’, but which decade would you really prefer to work and live in: the 1920s or the 2020s? We know which one we would choose!

Tags:
So much for the good old days… in materials handling we’re so lucky today!
Image: 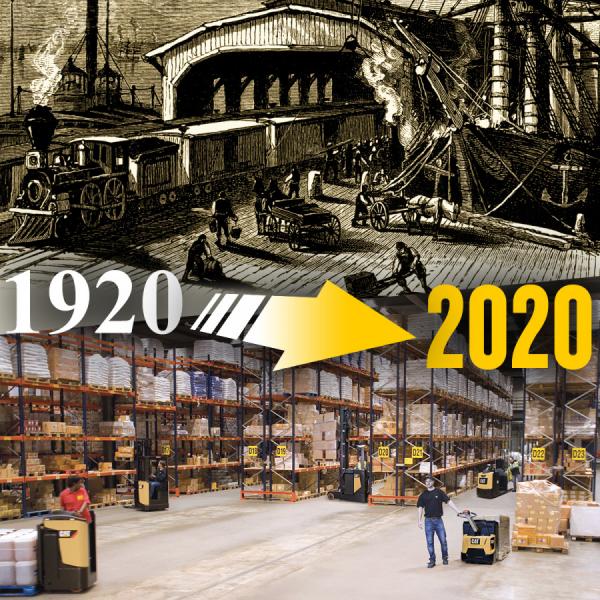