The Mission Antarctica 2048 project will result in two Dutch adventurers driving 2300 km with a solar powered vehicle to the South Pole and back. This project is a statement about alternative energy sources, sustainable ways of living and should above all be an inspiration to the youth to become more engaged into these topics. The project team was already supported in 2011 by Cat Lift Trucks when it needed to do the first vehicle testing near the manufacturing facility in Finland. The Antarctica project team sought and found the support again from Cat Lift Trucks when it needed to perform a second and final test in cold Järvenpää during the last week of February 2012.

The Mission Antarctica 2048 project started back in 2010 with the request of the adventurers Wilco van Rooijen and Fokke van Velzen to the University of Applied Sciences in Utrecht, the Netherlands, to design and build a car for their mission. Now, six students from Hogeschool Utrecht and one student from Avans Hogeschool, supported by six students ROC van Amsterdam, continued the project into the next phases culminating into this second test. A group of five students were actually going to test in Finland and they focussed on the endurance of new electronics and tyres. Also finding the right (read efficient) tire pressure was one of the challenges. The previous test showed that work had to be done on steering and suspensions and the adapted components were also put to the test. Besides all this component testing, the students simply tried to put mileage in and study how the vehicle would cope with the cold and snowy environment in Finland.

During the week, the students received a visit from the two drivers, Wilco and Fokke, who had to try the car themselves this time. The originators of the Antarctica project were very pleased. “After all the preparation and engineering work, we consider this test in the cold of Finland essential to proceed. We can now safely say this test enables us to go ahead with the preparations for the next episode; a last endurance test of driving at least 100 km on a beach by the end of April!” says Wilco van Rooijen. As their motto is “Dream, Share, Dare & DO!”, they cannot wait until the actual ride, which is still scheduled in December 2012 until January 2013. Besides the beach test, Wilco and Fokke will try to get as many sponsors on board, who share their goals of protecting the planet by promoting sustainable ways of using energy sources. Progress can be monitored at www.teamantarctica.nl.

Cat Lift Trucks again arranged support to the expedition by arranging shipment to Järvenpää , Finland, where it has a manufacturing site for warehouse equipment. On-site support with loading/unloading services and electrical energy was provided as well. Cat Lift Trucks is proud to help enabling this adventure, especially considering the aims of the overall project. Product development of Cat Lift Trucks is also continuously looking at alternative energy sources for their lift trucks and reducing emissions to the minimum. The possibility to further support project Mission Antarctica 2048 was an opportunity that could not be missed. In earlier issues of the materials handling magazine eureka, the project (then named Antarctica 2.0) was given a great deal of attention. If you missed it, look at www.eurekapub.eu and download issue no. 14. Naturally, there will be more articles about this amazing project in future issues of the magazine as the Great Journey approaches 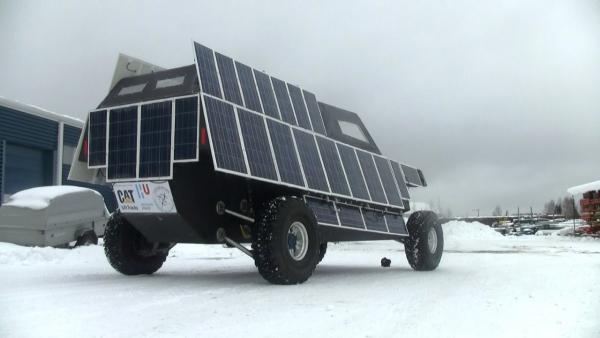